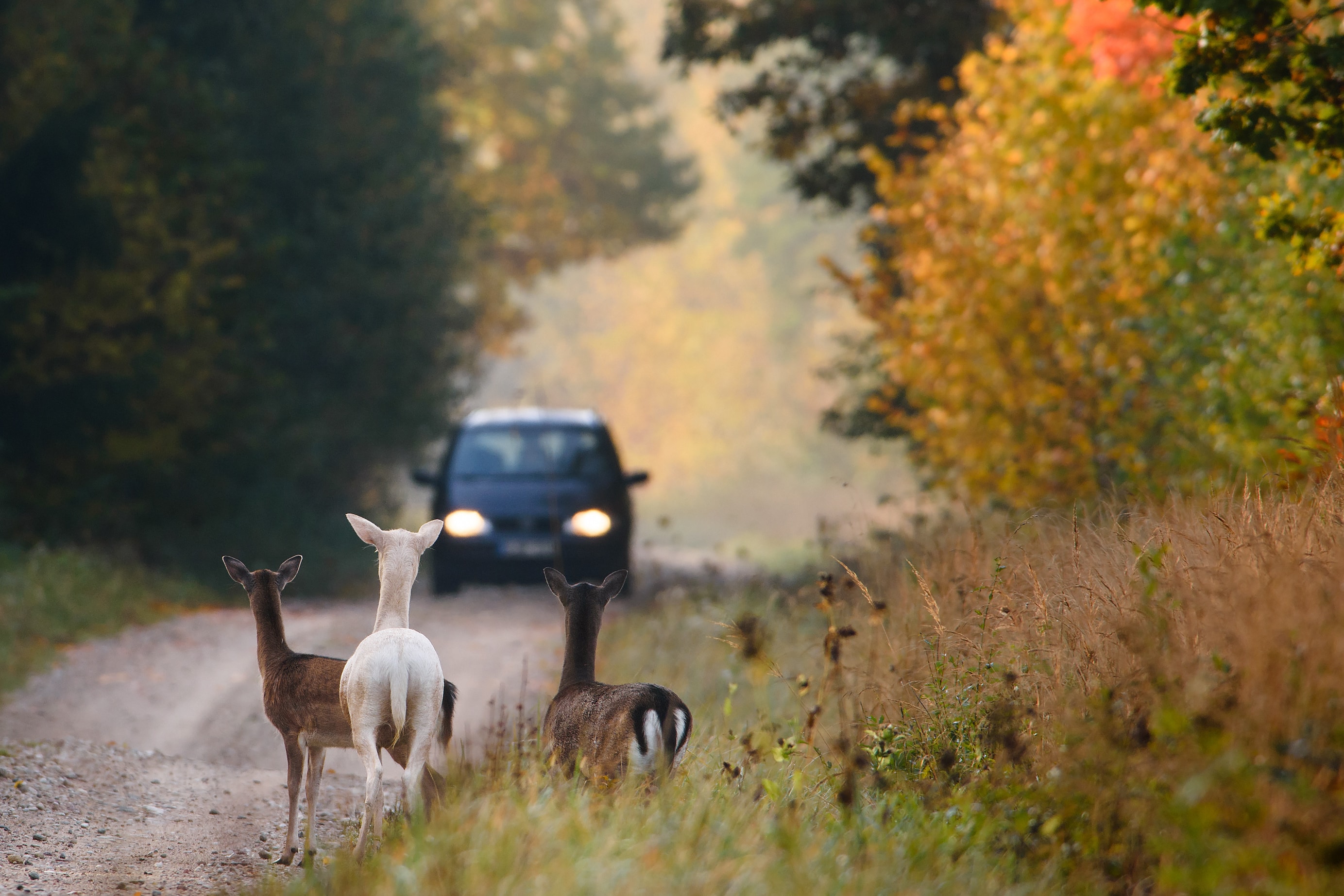 Whether it’s a dog or a cat, a deer or a bear, most of us have a soft spot for all kinds of furry creatures. But you don’t have to be an absolute animal lover to be horrified about the idea of having a car accident involving an animal.

It’s not just about feelings – animals crossing the road are a real danger to not just themselves but the driver too. There are up to 74,000 deer-related traffic accidents in the UK every year resulting in hundreds of human injuries and fatalities.

This year, a new road sign featuring a hedgehog was introduced to warn drivers about smaller animals too.

Hopefully, you won’t need this advice but it’s good to know what you should do if you hit an animal whilst driving.

What should I do if I hit an animal on the road?

You should always drive at a speed that is appropriate for the road and weather conditions, allowing you enough time to observe your surroundings.

That also means paying attention to road signs, such as deer warning signs (or the new hedgehog sign!), so that you’ll get a heads-up if you’re driving in an area where it’s common for animals to roam around.

Wild animals often move in herds so if you spot one on time, slow down but expect more to follow. You can do an emergency stop for an animal but always make sure it doesn’t endanger you or other drivers. As terrible as it is, hitting a small animal is better than swerving into oncoming traffic and causing a major accident.

If you do hit an animal whilst driving, take the following steps.

1. Stop and stay at the scene

If you have a car accident involving an animal and the animal gets injured, you’re obliged by the law to stop. There’s no need to worry about whose fault it is at this point, these things happen – it’s important to check everyone’s OK, including the animal, and to make sure the incident isn’t causing danger to other road users.

Your next steps really depend on the scale of the accident you’ve just had. If there were other drivers involved in the accident, you need to call the emergency services if needed, exchange details and call your insurer. Remind yourself of what to do if you have an accident.

Hitting an animal on the road can be very shocking and it might be your natural instinct to run to check on it without thinking about your surroundings. Don’t forget that your own safety comes first. Check your surroundings before leaving your car and make sure there’s no risk for other drivers.

It might be a small animal like a cat or you might have hit a deer on the road – whatever it is, remember that the animal is likely to be terrified too and could be aggressive. Keep in mind, it might try to bite or scratch you so move carefully.

3. Call the police if needed

The Road Traffic Act 1988 states that you’re legally required to inform the police if you hit a horse, cattle, an ass, a mule, a sheep, a pig, a goat or a dog. Strangely, this means if you hit a cat or a deer you’re actually not obliged by law to report it – but it’s important that you do.

If it is a pet and there is no owner’s information on the collar tag, you need to report the incident to the police within 24 hours. Of course, if the animal is badly injured, you should find a vet as soon as possible. Vets have a duty of care for any animal in an emergency so you won’t be charged.

If you’ve had an accident involving a wild animal, you need to call the RSPCA on 0300 1234 999, or call a near-by vet and check if they’re able to help. You won’t be responsible for paying the vet fees. Try to assess how badly the animal is hurt before you call someone, but make sure you observe it from a distance that is safe to you.

So, what about cats?

There have been many personal campaigns for cats in road accident regulations but for now this hasn’t changed. It’s devastating hurting someone’s pet so Cats Protection lays out advice to anyone who discovers an injured cat:

What should I do if I find a dead animal on the road?

You can always call RSPCA and they’ll be able to advise you whatever situation you’re in involving an animal. Ultimately, removing a dead animal from the road is a responsibility for the local council. You can use the Government search to find your local council here.

Don’t try to move the animal yourself as this could put you in danger.

What does my car insurance cover if I hit an animal on the road?

You should have your insurer’s claim line number saved on your phone in case you need to report a claim. As with any other incident – they all need to be reported – if your car is damaged, someone’s injured or there are other parties involved, you’ll be able to claim it on your insurance.

There are differences in what cover you have, its terms and conditions, so make sure you know your car insurance policy properly. If it’s a pet or a farm animal, the owner is responsible for keeping it secure so it’s possible they’ll be liable for your costs.

Have a look at the RSPCA website for more resources on protecting animals. Blue Cross can also help you if it’s about your own pet.

You might want to save the RSPCA 24-hour helpline number 0300 1234 999 on your phone in case you have a car accident involving an animal. Make sure you’ve also saved your insurer’s claim line on your phone if you need to report a claim.