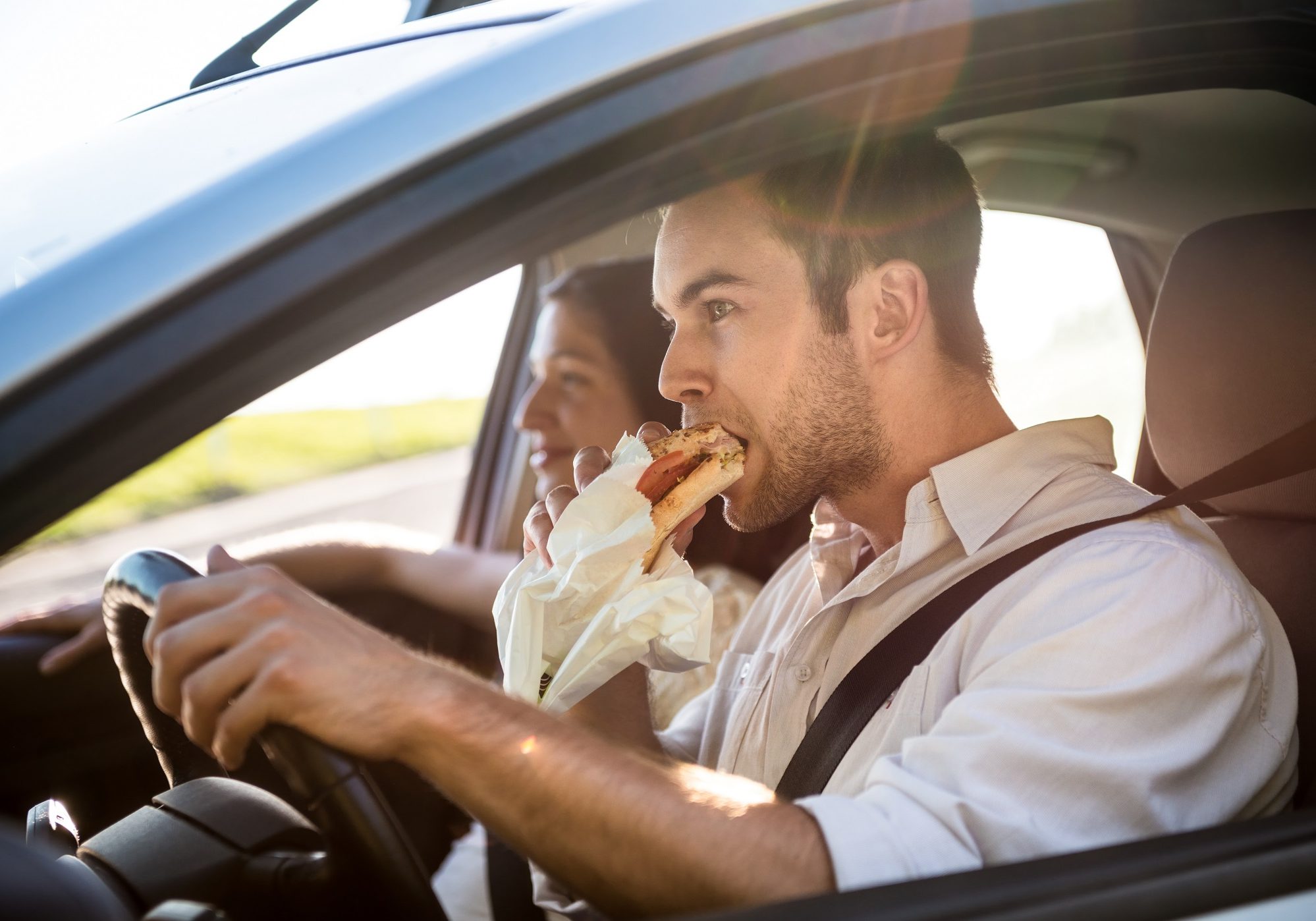 Information about how dangerous it is to use a mobile phone whilst driving is everywhere, but the dangers of eating while driving are often less publicised. However, eating while you drive is a big distraction, and can affect your reaction times just as much as using a mobile phone – if not more so.

According to an article in the Telegraph, the University of Leeds conducted a study which found that drivers who snacked while driving had reaction times up to 44% slower than usual, with drivers being 18% more likely to experience poor lane control. In the same article, the Transport Research Laboratory found that drivers who send texts while they drive are 37.4% slower to react – showing that eating can have a larger impact on reaction times.

Road safety charity Brake found that drivers who eat and drink at the wheel are twice as likely to crash, with this risk increasing for foods that are messy or hot, and for foods that you have to unwrap. As well as diverting your attention, eating at the wheel also provides a physical distraction by causing you to take at least one hand off the wheel to hold the food or drink.

Some drivers have hit the headlines in recent years thanks to their irresponsible eating antics behind the wheel. A woman from Surrey handed herself in to police after being caught on camera by a cyclist eating a bowl of cereal while driving, for which she received a Driver Referral Notice for driving while not in proper control of a motor vehicle. Her case will be reviewed by the Traffic and Process Unit regarding any further action.

Another woman from Dorset was fined £145 and given three penalty points on her licence for eating a banana at the wheel whilst stuck in traffic. However, had she accepted the on-the-spot fine and driving course offered by Dorset Police rather than trying to appeal, she would not have had any points put on her licence.The woman said that she was most frustrated by receiving the points, which are on her record as being for driving without due care and attention. “It is the same crime as someone who has knocked a pedestrian over – while mine are for eating a banana,” she said.

The Highway Code emphasises under Rule 148 that “safe driving and riding needs concentration”. They advise that you should avoid distractions when driving or riding, which includes things like trying to read maps, smoking and eating or drinking.

Eating while you drive isn’t technically illegal in the UK; however, there are laws that are in place to prevent drivers from engaging in distracting activities. If you are caught by police for being distracted behind the wheel then RoSPA advise that you can be charged with a number of different offences, including: Careless and Inconsiderate Driving, Failure to Be in Proper Control of the Vehicle, Driving Without Due Care and Attention and Dangerous Driving. The charge you receive will depend on how badly you were thought to have been distracted, and how badly the distraction affected your driving.

Ultimately eating while you drive, or doing any other secondary activity while driving, is distracting. RoSPA advise that people can’t always multi-task in this way, and doing a second activity can put too much pressure on a driver which can impact their driving capabilities. BT Motoring News recommend that if you feel the need to eat while driving, stop somewhere and take a snack break. During long journeys, taking a break after 2.5 hours can also help you avoid fatigue.

For more advice about reducing distractions while driving, take a look at our guide here.